There are several JPEG image compression tools available that takes a jpeg file and reduces the size of the photo without altering the quality. But which one works best for posting images on a website? I was curious, so I took the tools I usually use and put them through the compress photo function. All applications tested claims not to lower the quality of the image. I’m concentrating on testing jpeg files here, and do a followup article later with results for optimizing PNG files.

The images and source

I exported all the pictures from Adobe Lightroom 4 as jpg with a quality setting of 80, which is the one I usually use when uploading to my blog, Flickr or 500px. I’m not a big fan of jpeg artifacts, but you could get away with much lower quality setting depending on the picture. I tried to take different kind of images, where some contain a lot of details, and other with less, to see what kind of effect that has on the image compression result.

JPEGmini is an excellent image compressor application on Mac OS X. This is a tool primarily for compressing large size images and does a fantastic job of it. I’ve included lower resolution pictures just out of curiosity. And it seems like it’s a good match for some smaller images as well. But if you have to send large photos with the quality of the original still intact, this is the obvious choice. 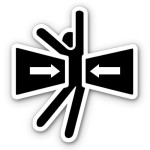 ImageOptim is a popular (and free) image optimizer for Mac OS X. It handles JPEG, PNG and GIF files. By utilizing several Open Source programs like PNGOUT, AdvPNG, Pngcrush, OptiPNG, JpegOptim, jpegrescan, jpegtran, and Gifsicle it has lots of muscle for jpeg compression.

For Microsoft Windows users, there are similar apps, like RIOT, but I haven’t tried it. YMMV[1].

A WordPress plugin that automatically compresses uploaded images. It has a lot of settings for optimizing the compression. This plugin is for those who host their server because you need to be able to install all the Linux commands requirements for the plugin. It uses jpegtran, OptiPNG/PNGOUT, and gifsicle for compression.
There is an alternative for those who don’t have shell access and the ability to install the extra software needed on the WordPress server. It’s called smush.it! But it sends all the images to Yahoo for compression, and there’s been a lot of problems getting it to work reliably.

Here you can see the power of JPEGmini in action. As you can see, the size of the first large image is almost cut in half using JPEGmini. In all pictures except image3, which is mostly white background, JPEGmini is the clear winner. On image3, EWWW Image Optimizer wins with about 8kb.
JPEGmini were designed to compress the size of high-resolution pictures, but it still holds up well with images meant for web publication.

Now the results are closer, with JPEGmini still maintains a lead, depending on the complexity of the image.

Now EWWW Image Optimizer and ImageOptim is the definitive choice. The difference is negligible between them, but a small advantage when compared to EWWW Image Optimizer. The similarities in results are not surprising because both utilities use the same engines, just with minor tweaks in the settings.

This confirms earlier findings, which JPEGmini works best with higher resolution images. EWWW Image Optimizer still wins over ImageOptim, but with just a couple of hundred bytes or they are the same size.

If you are about to upload sizeable high-quality photographs to your website or a photo sharing site, you can’t beat JPEGmini. The compression results are fantastic with no visible artifacts. It’s a steal and an essential tool for anyone dealing with photographs. It allows you to email a full res photograph from a high-end camera without losing image quality. And it saves bandwidth when uploading pictures to online services.

ImageOptim is an excellent standalone application for Mac OS X and its free! So this is the goto application if you’re compressing smaller jpeg, png or gif images. Drag and drop the picture, and you’re done. It’s an excellent choice if you can’t install EWWW Image Optimizer, or going to use the images for something else than publishing to a WordPress site.

But for publishing smaller images to your website if it’s running WordPress and you’re allowed to install software on the server, EWWW Image Optimizer is the way to go. All you have to do is to upload your image to WordPress, and EWWW Image Optimizer automatically compresses the pictures for you. And it works wonders with PNG images as well. It even has a bulk compress command for compressing photos uploaded before you installed the plug-in.

Images used for the test