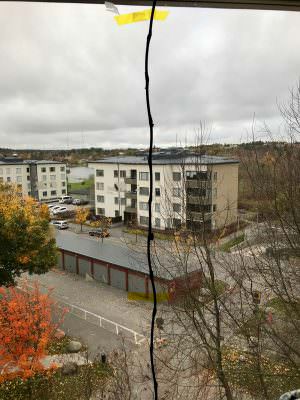 My first attempt of a Collinear Antenna. Professional mounting!

Part 1 – Checking the Velocity Factor of the Coax Cable

I have a homebuilt Collinear Antenna on one of my two ADS-B receivers. It’s an eight element antenna, built without any real effort of making sure that all the elements where the right length. So it’s about time to try to do it properly. The easy way is to get Flightaware’s great ADS-B antenna and filter, but it’s fun to build your own as well.

To build a good antenna, you would preferably use a Vector Network Analyzer so you can do proper measurements of your antenna design. With it you can quickly check stuff like SWR and optimize the impedance of the antenna at the frequency it’s intended to be used. In my case 1090MHz for ADS-B. But if you don’t have the money to spend, you have to improvise. I’m going to build a 12 element Collinear Antenna out of cheap RG-58 coax cable. But to calculate the right length of each element, we need to know the Velocity Factor, or the signal speed through the cable compared to light traveling in a vacuum. So let’s do the measurements.

END_OF_DOCUMENT_TOKEN_TO_BE_REPLACED 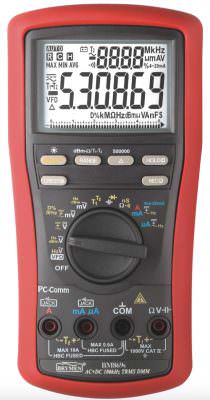 After replacing my lost Fluke 87V multimeter with a new Brymen BM869s (rebranded Greenlee in the US) about a year ago, I’ve been delighted with the multimeter. It has every possible function I could ask for and then some. It’s been my go-to meter when working on electronics projects. I do have a Siglent SDM3055 DMM that is very good, but due to its startup time, I usually reach for my Brymen BM869s when I need to measure something, and it has higher resolution. But after getting a broken HP/Agilent 34401A DMM from eBay, fixing it up and replacing all the capacitors, I now have a better reference. I’ve compared it to a friends calibrated 6 ½-digit multimeter, and it’s still within spec, so naturally, I want my Brymen to be as close to my HP 34401A as possible. Turns out that calibrating and adjusting the Brymen is quite easy. Here’s how to do it.

END_OF_DOCUMENT_TOKEN_TO_BE_REPLACED

Here is the second part of how to improve the quality of an old CD player, the Pioneer PD S-505. You can find the first part here. In this section, I’m going to show you how to install a better, more stable clock circuit into your 505 to lower the jitter. This particular clock comes from Kingwa, that has a series of crystal oscillators for improving DVD players, CD players, and DACs. The price is reasonable. I’ve installed them in three different units and had zero problems, so the quality seems reasonable.

Ok, so why install a new clock? Isn’t there one in there already? Yes, your right. But by using better parts like crystals with lower ppm and also design a very clean power supply to feed the clock, you can make your CD-player sound much better. And the reason is lower jitter.

But what is jitter? There is plenty of excellent places to go read up on it. Here’s some. END_OF_DOCUMENT_TOKEN_TO_BE_REPLACED

So finally my new ProAc Response 2.5 clone playing music. And how they play! I got myself a new Class-A amplifier to have something nice to drive them with. At first they sounded a bit short on the bass side, but now after about 20 hours of listening, the bass starts to improve. I’ve never believed in the “burn-in” of speakers, but I have to say I’ve been mistaken.

I invited some friends over for a music listening party. A lot of records and an even larger amount of beer made for a beautiful evening.

At the same time I ordered my new amplifier, I also ordered a new DVD player with DVD-Audio and SACD playing capability. So I rush out to get my hands on a SACD record, but the only one I could find was the slightly overplayed Dark side of the moon by Pink Floyd. But it was a good test record because I have two different mastering versions on cd, so comparing was easy. And to my surprise the CD (actually Flac played through my Squeezebox) sounded better than the SACD one! So I had to check that the player didn’t play the normal cd layer, but no, it played the SACD layer. The singing voices on the SACD sounded muffled compared to the Japanese pressing of the CD. Also the pinpointing of instrument placements in the stereo image was not as good an coherent from the SACD. The player a Pioneer 696 is a low budget player so it could be it. But I’ll crank up the manual and check so I haven’t done something stupid with the settings.

So I finished putting my new diy speakers together. I still need to put veneer on them (probably going to use cherry) But they sound great! Yes, really great. I’m going to add the notch filter, just to try it out.